by Down Hill Strugglers 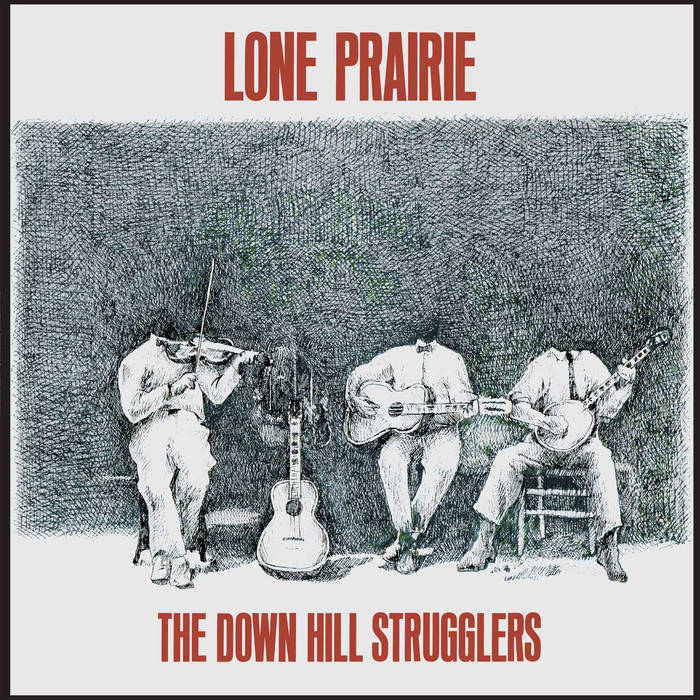 Jalopy Records, the record label of Red Hook's Jalopy Theatre, is proud to announce the release of "Lone Prairie", the album and first LP from The Down Hill Strugglers on April 28, 2017.

The Down Hill Strugglers is a string band composed of Eli Smith, Walker Shepard and Jackson Lynch, who play at various times; fiddle, banjo, guitar, mandolin and harmonica. They have been playing together for five years and have performed at the Newport Folk Festival, the Kennedy Center, the Library of Congress, the Brooklyn Folk Festival and many other places. In 2013 they were featured on the soundtrack to the Coen Brothers film, "Inside Llewyn Davis" produced by T-Bone Burnett. The Down Hill Strugglers band formed while hanging out at the home of their mutual friend Peter Stampfel of the Holy Modal Rounders, where they also met friend and mentor John Cohen of the New Lost City Ramblers.

The album features 13 all new recordings from the band and liner notes by Amanda Petrusich, contributing writer for The New Yorker, Pitchfork and a contributing editor at The Oxford American. Her music and culture writing has also appeared in The New York Times, The Atlantic, Spin, BuzzFeed, and she is the author of “Do Not Sell At Any Price: The Wild, Obsessive Hunt for the World’s Rarest 78rpm Records”. Petrusich has written that “The Down Hill Strugglers are, to my ears, the very best interpreters of traditional material presently going.”

From the liner notes:
“Lone Prairie was recorded in the spring of 2016 at the Jalopy Theatre in Red Hook, Brooklyn. The band used two microphones, and played directly into a mono Nagra one-quarter-inch tape machine. They either ducked away from or leaned toward the mic to get their sound levels right. Then they stopped monkeying with the recording altogether, which is surely part of why it feels so pure and urgent. It is energizing in the way that looking at a river is energizing.”

“So what does it mean for a young band to make music like this right now? Our cultural moment certainly allows for (if not encourages) gratuitous elevation of the Self above all – but the Down Hill Strugglers think about their work differently. Each of these tracks takes inspiration from the rural visionaries of the early twentieth century, from the melodies and expressions that once guided and sustained whole communities in the Mountain South, the Deep South, and Way Out West. Lone Prairie is an earnest monument to the rural artists and songs this band loves: the Mississippi Possum Hunters, the Skillet Lickers, Bill Shepherd and Dock Boggs, the Carolina Tar Heels, Frank Blevins, George Pegram, Wilmer Watts, and many others. Using lovingly excavated 78 r.p.m. discs as source material – Walker, Jackson, and Eli disappear inside these tunes. In this way, the Strugglers become part of a continuum. Their performance is less about ardent self-expression and more about empathy, of finding a way in to other people’s anguish and elation: understanding it, bodying it anew, respecting it, and carrying it on. They pay homage to and remake in equal measure, as artists have been doing for centuries. This, I believe, is the best and most useful work a folk musician can hope to do.”

The album will be released as an LP, as well as on CD and via digital download.

Bandcamp Daily  your guide to the world of Bandcamp